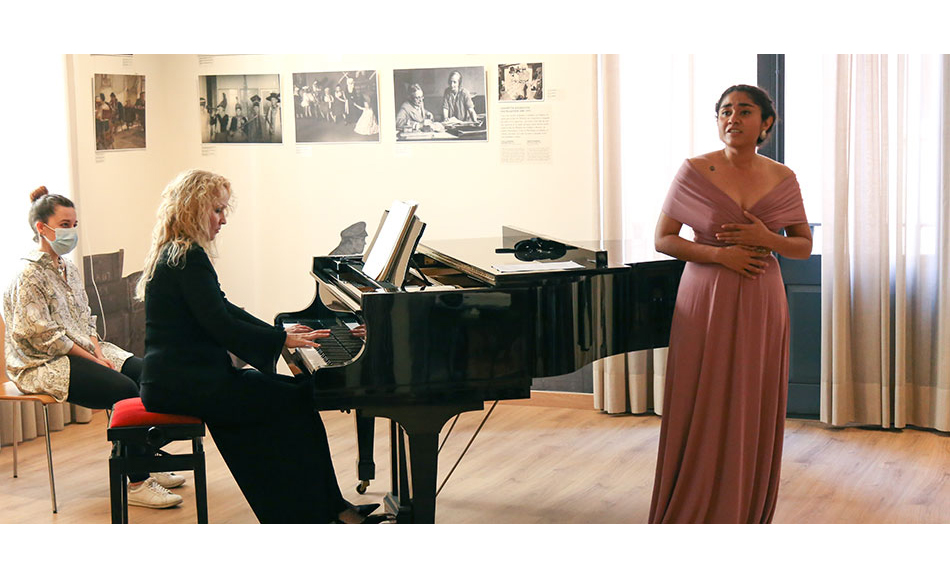 The Russian repertoire concert was presented at the Casa Russia Foundation in Barcelona by Laura López, winner of the Academy of Russian Opera GITIS Course grant awarded by the Liceu Conservatory Foundation.

As part of its international program, the Liceu Conservatory Foundation and the Academy of Russian Opera “GITIS” started their collaboration agreement with a Russian repertoire concert, showing the work done by Laura López, former student of the Conservatory, as a participant of the GITIS course.

The course was made virtually and focused on technical aspects of the repertoire of Russian composers: Tchaikovsky (Eugene Onegin) and Mussorgsky (Boris Godunov). It featured the participation of professors, conductors and singers of the Russian opera school: Alexander Barmak, Head of the course in the Faculty of Musical Theater of GITIS, Dmitry Bertman, Head of the Department of Direction and Interpretation of the Musical Theater of GITIS, founder and artistic director of the Moscow Musical Theater “Helikon-Opera”; Dmitry Vdovin, professor of voice at the State Choral Academy, founder, artistic director and professor of voice of the Young Artists Program of the Bolshoi Theater of Russia, and Alexia Mankovskaya, singer, songwriter and coach in opera pronunciation of Russian composers.

At the concert some of the works that were worked on in the course were performed, such as the Evgeni Onegin’s letter scene by Tchaikovsky and some songs by Rachmaninoff, accompanied by Olga Kobekina, a professor at the Liceu Conservatory who performed parts of the work of P. Tchaikovsky The Seasons Op.37: “June. Barcarola” and “November. Troyka”.

Laura Elena López was born in Mexico and settled in Barcelona, where in 2019 she finished her higher studies in Singing with the teacher Carmen Bustamante and the repertoire player Olga Kobekina at the Liceu Conservatory.

Watch the video at the following link.