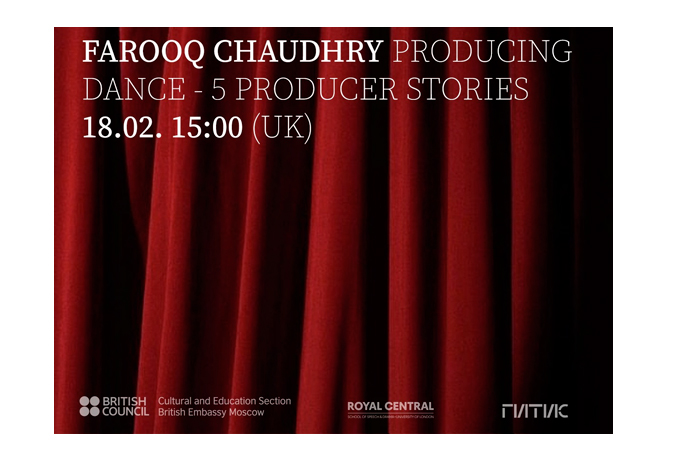 This lecture is part of the UK-Russia Creative Bridge program — it is organized by the Cultural and Education Section of the British Embassy in Moscow. Farooq Chaudhry’s lecture is a part of the programme between Russian Institute of Theatre Arts (GITIS) and Royal Central School of Speech and Drama called Producing for Dance, Digital and Non-Traditional Spaces. This collaborative program also includes series of workshops and lecturers for the students and professors of GITIS.

Farooq Chaudhry OBE, co-founder and producer of Akram Khan Company, plays a key role in forming innovative business models to support Khan’s artistic ambitions and projects. Chaudhry also produced for China’s national dance icon Yang Liping and English National Ballet and was awarded an honorary doctorate from De Montfort University for his services to dance. In 2014 he founded Skye Blue Productions to support emerging artists. In 2019, as part of the Queen’s New Year’s Honours, Chaudhry was awarded an OBE for his services to Dance and Dance Production and was appointed a Tate Artist Trustee. Farooq is committed to “levelling the playing field” for artists, audiences and cultures.

This lecture will be broadcasted live on GITIS YouTube Channel.